The happenings of Forest Fire troubled every country all along, which caused great losses every year. There was a message from China News Agency Beijing which was reported on February 16, 2009. It said that the constant high temperature and drought ,as well as the precipitation decreased ,resulted in the high forest fire weather rating in some provinces and regions of southern China. In addition, the growth of the moor bums which was brought about by farmers lead to the number of forest fire increased rapidly. Forest fire causes the timber to reduce the quantity and quality, so that a large number of animal and plant deaths, destruction of nature and ecological balance, even small climate change of the forest. Above all, the prevention of the occurrence of forest fires is significant.
Traditionally, fire prediction can only analyzed and calculated the predicted weather conditions to get a rough and rigid fire index value. What’s more, it used the traditional manual inspection methods which can’t realize on-site and real-time monitoring and control.
In recent years, because of the rapid development of sensors, microprocessors, and network technology, a reliable technological condition has been provided for our automatic real-time monitoring of forest fires control.

Forest fires are among the disasters that have multidimensional negative effects in social, economic and ecological matters. The probability of ignition of forests is in solid increase due to climate changes and human activities. Forest fires reduce the cover of tree and lead to an increase in the gas emissions of our planet, and approximately 20% of CO2 emissions in the atmosphere are due to forest fires. Faced with these horrific numbers, it becomes very urgent to review the classical forest fires detection
methods for which a key problem is that when the fire becomes large it becomes very difficult to put out.
In this case, a wireless sensor network (WSN) technology could be deployed to detect a forest fire in its early stages. A number of sensor nodes need to be pre-deployed in a forest. Each sensor node can gather different types of row data from sensors, such as temperature, humidity, pressure and position. All sensing data are sent wirelessly in ad-hoc fashion to a sink station, which in turn transmits data to the control center via a transport network such as GSM, UMTS, Satellite, TCP/IP networks. The networked system must be real time; otherwise it will be of no use.

ASM Co as the leading solution provider in this region uses Monitoring of combustion gases and preemptive fire conditions to define alert zones, and by employment of various WSN (Wireless sensor networks) creates a trustable infrastructure to transfer real time data of sensors to the the operation center to expedite any reaction to fires in the forest. 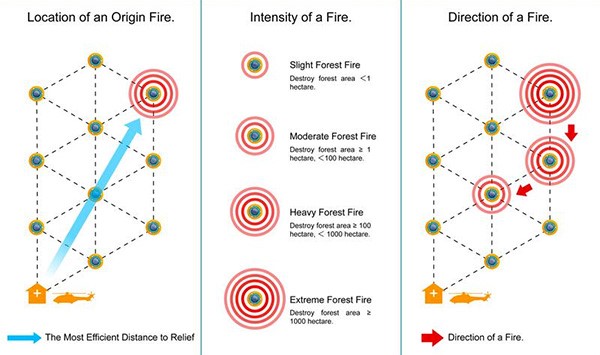